In nowaday company achieved sufficient level of IT-development scripts cover all infrastructure. They are used for management, monitoring and other automation tasks and are applied in a lot of systems. Scripts are a perfect tool for solving specified or temporary tasks locally appearing in the company, which have not ready-to-use appropriate solutions. Nevertheless there development is much easier than creating full-featured applications that allows getting problem solution quickly and by available means. However this solution has reverse side. 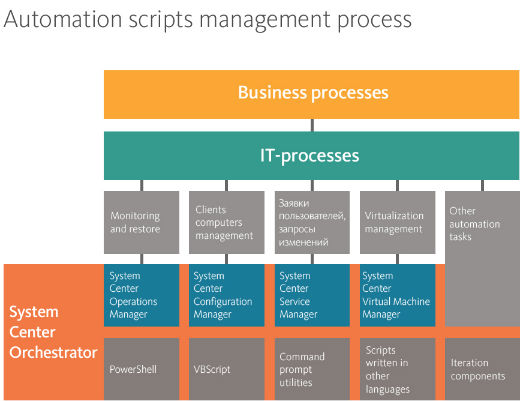 While organizations are tending to increase management and automation level of their IT-infrastructure, amount of various processes automation scripts increases. However these scripts themselves are not always organized properly enough and it often bears a risk in case of administrator who has created the script leaves (for his vacations or even for another company). Necessity to change or expand script quickly can result in long idle time of organization’s infrastructure while new employee is studying running processes (in case it is even possible).

The offered solution allows creating consolidated storage of scripts being applied in the company, monitoring their running status and failures, carrying out changes audit and transforming them from notepad quick notes to the level of serious and flexible organization.

Usually a lot of companies while automating their systems find themselves covered with a bulk of scripts written by different administrators (including ones retired long ago), located in different places (from administrator’s work notebook to enterprise servers), controlled by nobody (log-files are written to location, about which nobody knows), written in different languages, in different styles, using different libraries, non-updatable and undocumented.

Let’s consider these disadvantages in details:

We offer solution of all problems listed above using leading specialists’ experience in professional scripts development in two ways:

The first way is creating procedural regulations for scripts development, documenting and exploitation. These regulations will help you to create formal basis for order bringing and maintaining. Regulations will define standards and recommendations, the same for the whole organization, such as the following ones:

The second way is a system for automation and coordination of automated processes, “orchestrator”, such as Microsoft System center Orchestrator or VMware vCenter Orchestrator. Orchestrator has capability of developing complicated automation scripts in graphical interface, called “procedures” (RunBook). Graphical expose significantly facilitates reading and understanding logic of procedures for administrators regardless which programming language they prefer. Moreover, Orchestrator allows executing common scripts written in any language, remotely as well, in Windows and *nix systems that provides saving existing resources and processes without having to completely rewriting.

One of the main stages of such solution is analyzing available infrastructure of scripts and existing processes in the organization. Only then this stage is followed by development of regulations and approaches being appropriate for the organization and allowing improving situation with sufficient flexibility but without doing harm for the organization by complicating the process needlessly.

As a result of solution implementation your organization will be able to use automation scripts in a good cause without putting the company to additional risks but with increasing efficiency by reducing administrators’ workload and freeing them from routine work in favor of other tasks providing benefit to business.

To know more about regulations, recommendations and approaches to solving your problems you can use special form.