Forefront Identity Manager 2010 (FIM 2010) is a follow-up of MIIS 2003 (Microsoft Identity Integration Server) and ILM 2007 (Identity Lifecycle Manager) product lines designed to manage identification information. Thus, in spite of number “2010” at the end of the product name FIM 2010 has a reputable more than ten-year history. While the names of new product versions were frequently changed, Microsoft did not change the word “identity”, and managing just this “identity” is the main function of FIM 2010.

By using FIM 2010 information from data sources can be aggregated within virtual shared storage Metaverse and distributed among the systems according to a set of rules. Schematically this process can be presented as following: 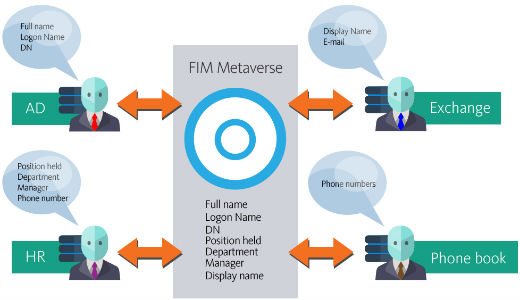 Furthermore one of the main distinctions between FIM 2010 and its predecessors is the capability to respond to status changes of objects being stored. This turns FIM from standard set of tools for synchronization, which is realized in the most companies as self-written scripts in one way or another, to the powerful system managing credentials life cycle from creating at the moment of hiring an employee till locking or deleting at the moment of dismissal of the employee.

It is important to note that FIM workflows initiated as a response to user data change are developed on the basis of Windows Workflow Foundation platform that allows implementing almost any scenario. For instance, on the dismissal of an employee the system can automatically do the following:

A pleasant supplement is a capability provided by self-service user portal which is a component of FIM 2010. By using the portal users can make modifications in their information (e.g. modify room number or phone number) and request membership in security or distribution groups. In this case modifications made to the portal by the user can be either saved at once or sent to approval according to specified workflow.

Furthermore self-service portal allows the user to reset forgotten password by using a component installed to the workstation. To do this the user having permission to use this functionality should register at the self-service portal and enter his answers to a set of questions configured by the administrator. When the user tries to reset his password by himself he is offered to answer a specified number of those questions again and according to the number of correct answers it will be decided to reset password or, for instance, send a message to security service.

To sum up, FIM 2010 allows achieving the following: